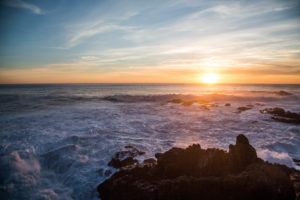 An important aspect of the Pigeon Point program is based on encouraging students to gain a greater sense of personal responsibility through the completion of chores and tasks as part of a team.  Students are assigned to one of four chore groups named after local marine mammals that they are likely to see during their visit.  Within these chore groups, students have the opportunity to participate in all aspects of food preparation and clean up, maintain a tidy living space, and work together in completing assignments and group challenges.

The chore group mascots are the Gray Whales, Southern Sea Otters, Northern Elephant Seals, and Harbor Seals. By identifying with these animals, Pigeon Point students become interested in the history and plight of California’s marine mammals. 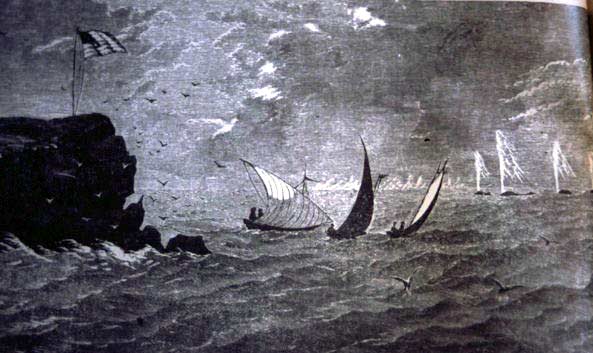 Pigeon Point has a long history of whaling. Back in the 1800’s, whalers would launch after gray whales that were migrating up the coast from January to March. They used small sailboats to chase the whales and harpoons to kill them. Once they caught a whale, they had to row their boat back to shore since their sails were useless in towing such a massive creature. The whale blubber was then used to make oil, which was then utilized for multiple purposes: from machine lubrication to cosmetics. Soon, with improvements in boats and harpoons, whale populations plummeted to near extinction. Gray whales were put on the federal Endangered Species list, and now whaling is illegal in the Monterey Bay Marine Sanctuary.

Modern day “whalers” at Pigeon Point utilize binoculars and spotting scopes instead of boats to spot the whales, and cameras to capture them. Many of the students at the Pigeon Point program (weather permitting) have the unique opportunity to spot the gray whales as they migrate North to feed off the coast of Alaska, and spot Humpback whales that live along the California coast year round. 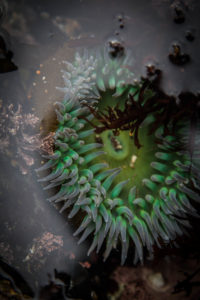 Every week, the students at Pigeon Point explore the inter-tidal region of the Pacific coast. Prior to exploring the tidepools, a slideshow presentation prepares students how to safely explore this ecosystem. With the guidance of the staff naturalists, students discover the diversity and complexity of the ocean’s web of life. Students learn about the organisms that live in the tidepools and how they have adapted to live in this extreme environment.

The tidepools at Pigeon Point offer a unique and exciting classroom for our students. From tiny hermit crabs and nudibranchs to sunflower stars that can reach a diameter of up to three feet, students enjoy finding and interacting with the beautiful specimens found in the intertidal region.

During the months of January to May, students at the Pigeon Point program have the amazing opportunity to visit Año Nuevo State Park, located just a few miles down the coast from the Pigeon Point Lighthouse. The sandy beaches of Año Nuevo are home to one of the few

Northern Elephant Seal rookeries in California. These incredible marine mammals can weigh as much as 5,000 lbs and reach lengths of up to 15 feet long.

Starting in January, students watch as the bulls stake out their territory in fierce battles. As the season progresses, females arrive and the pups are born. After about a month of nursing, the pups have grown from about 75 lbs. to over 300 lbs. Mating occurs as the female departs, and the pups (now called “weaners”) wait until all the large males depart and learn to swim. 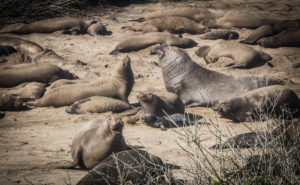 Students that arrive later in the spring see the seals as they are molting (shedding their skin) and lay about in the sand.

However, Elephant Seals are not the only attraction at Año Nuevo State Park. Migrating birds can be spotted as they head north for the summer, raptors soar overhead, and pelicans dive into the water. Ano Nuevo is home to the Endangered San Francisco Garter Snake. It is also interesting geologically, with faults, fossils, and migrating sand dunes. Historically, Native Americans (Ohlone) lived here for 10,000 years, collecting food from the ocean and hunting in the grasslands Later, the Steele family farmed the land and grazed cattle, creating most of the buildings you see today.. Año Nuevo State Park now works with the Amah Mutsun Tribal Band to steward the land that their people have had for thousands of years. 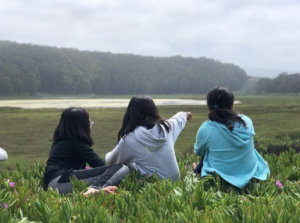 Just a short drive North from the Pigeon Point Lighthouse, the Pescadero Marsh is where our students that come during the months of September-December will visit. Students will get to explore the only extensive wetland area in the San Francisco Peninsula and learn to identify some of the native plants that exist on our coast. Students will also get to learn about the rich ecosystem that thrives here and the five different types of habitats that exist within the marsh. The marsh is full of bird activity, being a home to over 200 bird species, along with endangered animals such as the San Francisco garter snake. 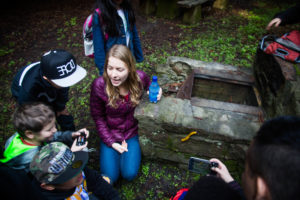 Just a short drive inland from the Pigeon Point Lighthouse, Memorial County Park is a majestic classroom of old-growth and second-growth redwood trees. Students have the opportunity to walk among and inside redwood trees, while naturalists guide them through lessons on redwood natural history. Students learn about decomposition as they meet the charismatic invertebrate of the redwood forest, the banana slug. Pescadero Creek runs through the park, providing students with the opportunity to explore this riparian ecosystem, home to numerous aquatic invertebrates and the seasonal spawning Steelhead Trout.